Although the Mesoamerican Coffeelands (Central America and Southern Mexico) are a relatively compact geographical region, they contain a diversity of coffee production systems—agroecologically and organizationally. CRS has ongoing programming with community groups in Oaxaca (one of whom, SICOBI, will be highlighted in a subsequent post), farmer groups in San Marcos, and groups in Zacapa and Chiquimula in Eastern Guatemala.[1] These three regions have diverse coffee systems but face many of the same challenges to achieve profitability. Let´s dig into our data from the field and take a closer look at two of these systems.

Oaxaca´s farmers are tightly organized in communal land management organizations whereas the farmers in Eastern Guatemala are generally unorganized or loosely linked to a coffee cooperative. Oaxaca´s production systems are forestry/agroforestry systems with a high degree of biodiversity (over 15 tree species per hectare), organic production, and are low input and low yielding. Until recently, many of the farms had not been renovated in more than 80 years. By contrast, Zacapa and Chiquimula´s coffee systems are not particularly diversified beyond a few shade trees. They invest heavily in inputs, have higher costs, and significantly higher yields. Many of these farms were renovated over the past five or six years.

Now that we have laid out some of the basic characteristics of the two coffeelands in question, let´s compare these cases, in terms of costs of production, yields, and profitability (gross profit[2]). 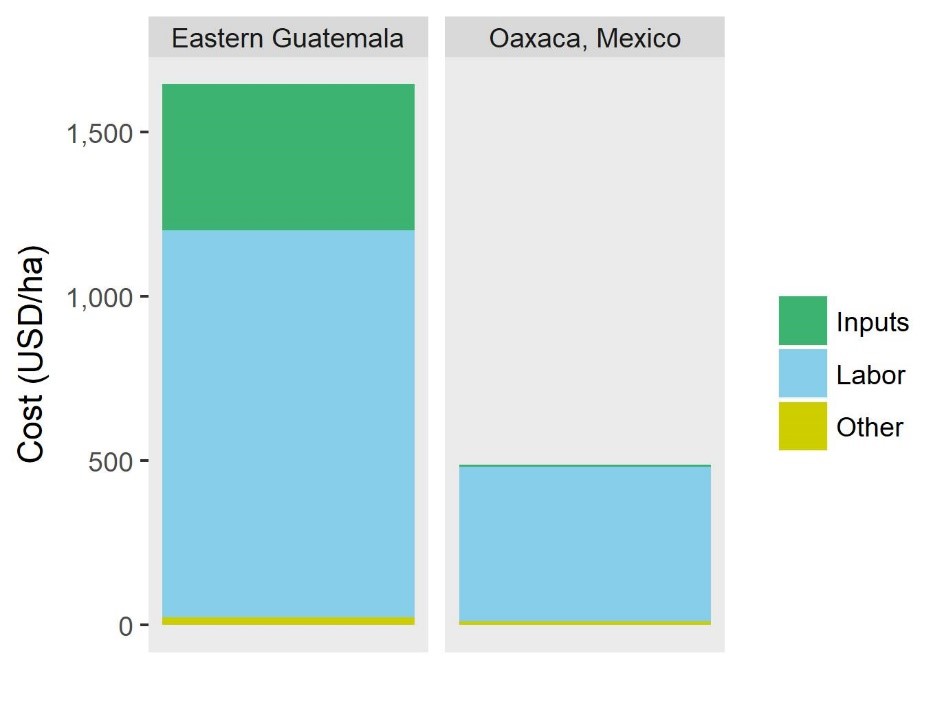 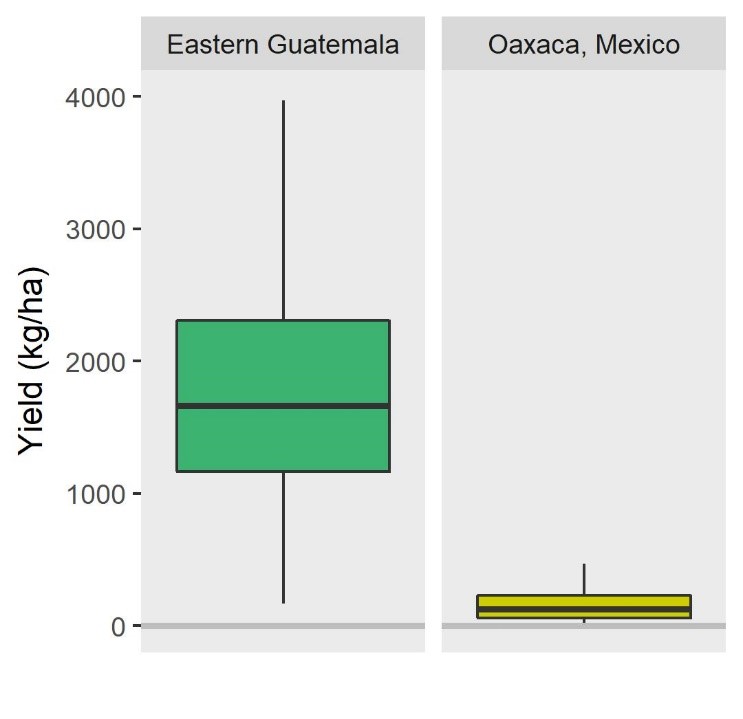 The data presented in Figure 2 is an average of biannual yield data from a sampling of 100-plus farmers in both regions.[3] At a glance we can see that the Eastern Guatemalan coffee farmers have significantly higher yields per hectare (parchment) than their Oaxacan counterparts. That said, whereas Oaxaca´s organic, biodiverse systems have uniformly low yields (between about 2-4 export bags[4] of coffee per hectare), Eastern Guatemala´s yield numbers are highly variable, ranging from below 10 bags to upwards of 60 bags, despite relatively uniform costs of production.

However, like with the macadamia-coffee study from the previous post, let´s go beyond yields and look at gross profit data from both systems. 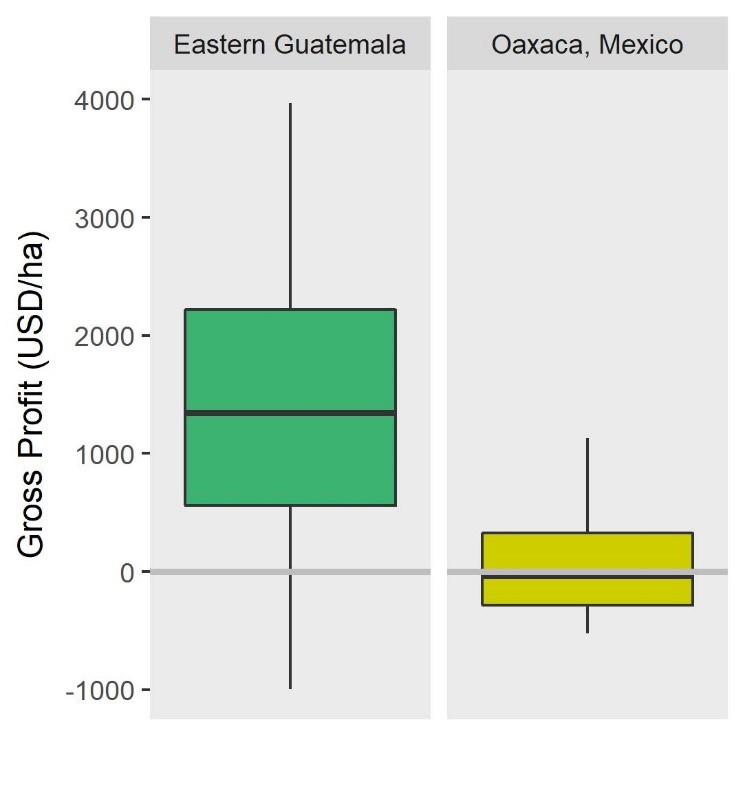 Despite both regions having their distinctive organizational, agronomic, and ecological features, both systems have their challenges when we get down to profitability. The gap between the average profit numbers of the two systems is much narrower than the gap between yield and cost data. In fact, some of the higher performers in Oaxaca are generating profit comparable to the Eastern Guatemala’s average farmer ($1200/ha). Eastern Guatemala with its high costs and high yields has a huge range of outcomes (+/- $5000/ha) with some farmers $1,000 in the red and a few fortunate ones with incomes upwards of $3000/ha (we controlled for price using the March 2019 Future C-Price).

Although neither system is particularly profitable, a $1200 income isn´t much per year for a family of 5 or 6. Nonetheless, of these two groups of farmers who would you expect to be migrating? The Oaxacan ones, right? But what we are seeing are farmers in Eastern Guatemala, like Francisco (see Part 1 and Part 2 of this series), who have some of the highest yields in the region, migrating North.

There is a catch, and this will lead us into the second part of this series on farmers´ elusive quest for profitability, a series which started with Francisco´s journey North and will continue with a look at “solutions in progress” at the field level. The Oaxaca system, due to strong community-level organization and an innovative livelihoods model supported by a local NGO, has managed to improve the profitability of its coffee farmers. We will look at this model in a subsequent post.

The Eastern Guatemalan farmers have also been able to improve their systems during the past few years by improving their soil management and applying targeted practices which have resulted in some big jumps in yields and lowered costs. Nonetheless, this group of unorganized farmers have not been able to make the market linkages necessary to break free from the C-price, and thus despite their yield gains and improved efficiency, they are the farmers headed North.

[1] CRS also has coffee programming in Honduras, El Salvador and Nicaragua- each with its own distinctive features as well.

[3] Data collected from 156 farmers in Eastern Guatemala and 135 farmers in Oaxaca.